Below is the official Devils Tower National Monument map as a jpeg and in four geocoded formats: GeoPDF, GeoTiff, KMZ file, and Oruxmaps. 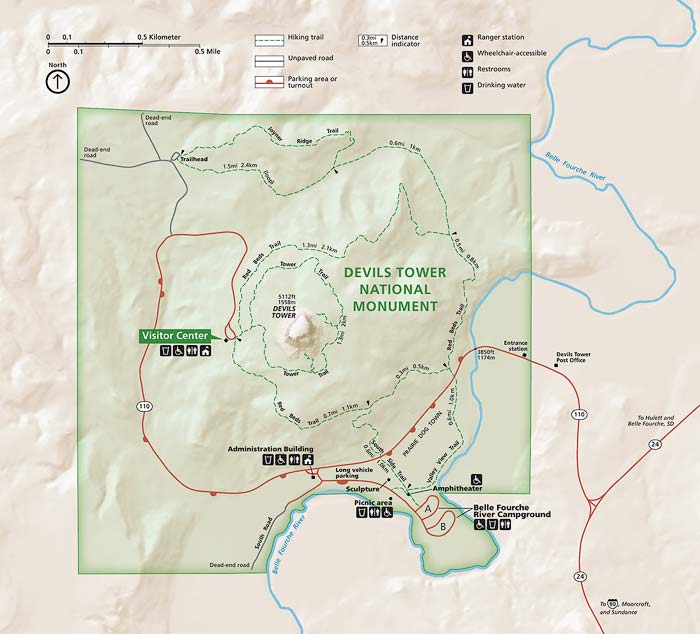 Devils Tower is open every day of the year. In late September the aspens at Devils Tower change color, and around mid October the cottonwoods at the Belle Fourche campground change making this the perfect time to visit. June through August can be crowded. During the summer arrive at the entrance station early or expect to spend 30 minutes or more in the line at the gate. The National Park Service maintains visitor statistics for Devils Tower.

The Belle Fourche River campground is closed from November through April, and is currently (2020) closed due to Covid-19. It has 46 sites and handles RVs up to 35 feet. There are no Hookups but potable water is available. No reservations; strictly first come/first served. In the summer on weekends the campground may fill up, but theres a good chance on weekdays the campground won't fill. There is decent cell service from Verizon and AT&T. A KOA campground with full hookups is just outside the entrance gate.

If you would rather not camp Devils Tower Lodge is just outside the park and well regarded. The lodge is normally open from May 1 through September 30. It has only six rooms so I suggest you book early.

Devils Tower climate is that of a a typical high desert in the northern part of the US. Winters are very cold with lows around 15°F and highs around 32°F and understandably there is little visitation. Winter is also the cloudiest part of the year with cloudy or mostly cloudy days 50% of the time. Despite the clouds winters are relatively dry with monthly snowfall normally between one and two inches. Spring is milder with overnight lows in May around 40°F and highs around 60°F. Cloud cover is similar to winter. Snow in April is not uncommon. Summers are warm with highs in the high 70s to low 80s and lows in the low to mid 50s. Summer brings clear to mostly cloudy skies 75% of the time. September and October bring cool weather with clear or partly cloudy days about 60% of the time. Historical temperature, cloud cover, and rainfall data for the town of Sundance, Wyoming (about 20 miles from Devils Tower) can be found on weatherspark.com.

Devils Tower is yellow and gray in color and does not photograph well mid-day. At sunrise and sunset it takes on a warm orange color and is spectacular. There are several good photo opportunities in or near the park.

If arriving from the south, as most visitors do, you will come to a series of viewpoints along Highway 24. These present unobstructed view of the tower and are best at sunrise. Texas longhorns and buffalo graze the fields to the left of 24 and make excellent foreground when present. Another good sunrise viewpoint is from the Belle Fourche River Campground. Reflections of Devils Tower in the river occur at several spots, I have shown one spot on the map below. If you are there in late September to mid October try to include cottonwoods in your image as well.

A sculpture know as The Wind Circle, or the Sacred Circle of Smoke, is only two hundred yards from the Belle Fourche River campground and should definitely be seen. The sculpture, made of carrara marble, was created by internationally renowned Japanese artist Junkyu Muto. It frames Devils Tower perfectly and is good at both sunrise and sunset. The excellent image shown above was taken by Anne Harden / CC BY-SA (https://creativecommons.org/licenses/by-sa/4.0)

Perhaps the best location for sunset and Milky Way photography is from the Joyner Ridge trailhead parking lot. I suggest you shoot sunset and then stay until the Milky Way rises next to the tower. Devils Tower is too far away to light paint so I suggest you composite an image shot near sunset or under moonlight with one of the night sky. May or June work better than July. By mid-July the Milky Way is starting to get too far south of Devils Tower to frame it.

To view the map in Google Maps please click anywhere on the map above.

In addition to a Google Map of Devils Tower I have also added a Caltopo Map that can be accessed by clicking on the next icon.

Caltopo maps have several advantages over Google maps and a few disadvantages. For most purposes Google Maps are more than adequate, but if you plan to do off-trail hiking Caltopo maps are preferable.