Denali National Park is covered by Denali (western part of the park) and Healy (eastern part) 7.5 minute USGS topographic maps. These maps were created as part of the USGS Alaska Mapping Initiative and can be found on the National Map Server.

The Healy area is covered by 96 topographic maps, as is the Denali area. Each map has three identifiers, an east-west number running from 1 (east) to 6 (west), a letter running from A (south) to D (north), and a quadrant (SE,SW,NE,NW). 7.5 minute topographic maps are available on the US National Map Server at https://viewer.nationalmap.gov/basic/#productSearch. All maps on the National Map Server are in GeoPDF format. These 7.5 minute GeoPDF maps can be easily converted to KMZ, Geotiff, or RMAP format using the program (MAPC2MAPC. Current USGS 7.5 minute maps have several layers, one of which is a low resolution image of the terrain. This image provides very little information so I have chosen to remove it from the GeoTIFF, RMAP, and KMZ maps below. After removing the image layer current USGS maps are much closer in appearance to traditional USGS maps. Removing the image layer makes it much easier to view the map on your phone, tablet, or mapping GPS. MAPC2MAPC recently added the ability to remove selected layers from a GeoPDF when loading. You must be using MAPC2MAPC version 5.6.6 or higher. The option to remove layers is found on the Settings screen Load tab under PDF Layers Off. 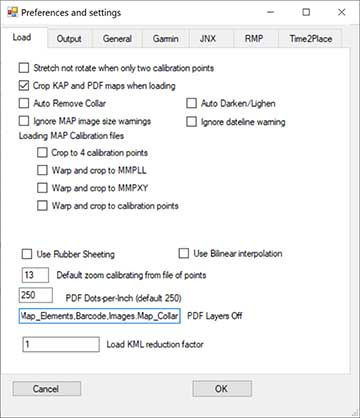 Any layer names listed in the input box to the left of PDF Layers OFF will be removed from the final map. To remove the image layer and largely decollar the map enter Map_Frame.Projection_and_Grids,​Images.Orthoimage,Map_Collar.Map_Elements,​Barcode,Images,Map_Collar in this input box. Multiple layers can be removed by separating them with commas. Do not include any spaces between items, and if there is a space in the layer name replace it with an underscore (_). Finally be sure the option "Crop KAP and PDF Maps when Loading" is checked. You can usually leave "Auto Remove Collar" unchecked but you may need to enable it in some cases.

Healy and Denali maps are available in a variety of mobile-friendly formats below.