Permits for Coyote Buttes North are tough to obtain, with demand greatly exceeding supply. All Coyote Buttes North permits are awarded by a lottery held on recreation.gov. The advanced lottery opens up four months in advance of your trip date. You have the whole month to apply. For example, for a January 15 permit you would open the lottery page on recreation.gov in September. The fee to enter the online lottery is $9 per group effective June 1, 2020.

On each lottery application, you can select up to three dates. The drawing is held the day following the close of the lottery (i.e. October 1 in our example). Shortly after the lottery closes, you will be notified via email whether you were successful or not. If you do not receive a notification by the 2nd of the month, check your spam folder. If you still haven't received notification it is likely you mistyped your email address on the application. In this case, you should call the BLM at (435) 688-3200 or email them at blm_az_asdoweb@blm.gov for a status. If you win the lottery, you will have to pay an additional $7 per individual fee for the North Coyote Buttes permit.

Unlike the past, unconfirmed or canceled permits are not placed back into the pool or made available for permit reservations.

If you are unsuccessful in getting a Advanced permit for Coyote Buttes North, and are in the Southern Utah / Northern Arizona area, consider getting a "Daily Permit". Daily permits are issued two days in advance of the day you wish to hike in to The Wave. Starting on March 15, 2022 you can apply at https://www.recreation.gov/permits/4251909 two days in advance of your trip date. There is a $9 fee to apply. You can only apply via your phone or mobile device (e.g. tablet). You cannot apply via a desktop computer. The GPS on your phone must be on. You must be within a "geofenced" area in Northern Arizona/Southern Utah to apply. The area includes the towns of Kanab, Page, Big Water, Fredonia, Glendale, and Jacob Lake among others. The map to the right shows the geofenced area, you can click on it to see a larger image. Alternatively you can download a full resolution map in a variety of geocoded formats:

You can load this map onto your phone's GPS software to see whether you are in the geofenced area.

The procedure to apply for a daily permit is as follows:

The new "Daily Permit" system is more user-friendly than the old walk-in lottery. You no longer need to be present in Kanab at 9:00 AM the day before you wish to hike to The Wave. You only need to be in the general area of Page and Kanab. You can go out for an early morning photo shoot or sleep-in if you wish. The downside, there is now a $9 per group fee to enter the lottery. It used to be free. 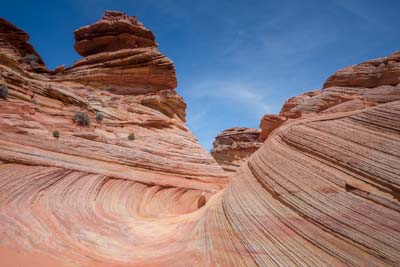 New in 2020 - You cannot hold two Coyote Buttes online permits at the same time. For example if you have a permit for December 15 you cannot get one for March 2nd until December 15th has passed.

Walk in permits for both Coyote Buttes North (until March 15, 2022 when the system changes) and Coyote Buttes South are issued by lottery one day in advance of your hiking date in Kanab at the Kanab Center Gymnasium, 20 N. 100 East in Kanab, Utah. Note that the lottery is no longer held at the Grand Staircase Escalante National Monument (GSENM) visitor center. The Kanab Center is on the east side of Highway 89 just past the Hampton Inn. If you pass the Best Western you've gone too far. From March 15 to November 15 permits will be issued every day of the week excluding national holidays. During the winter months (approximately November 16-March 15) weekend and Monday permits are issued on Friday.

The lottery for Coyote Buttes North permits in Kanab is held at 9 AM Utah time. The lottery for Coyote Buttes South permits is held at 10 AM Utah time. If there are fewer than ten people applying for a Coyote Buttes South permit, one will be issued on the spot at 10 AM. If you are hiking alone, your chances for a permit are better than for a group. For example, if permits were already issued for two groups of four and a single, and you are the only single left, you will get a permit unless a group is willing to be split up.

The number of applicants at the walk-in lottery varies greatly by month, and slightly by weekday. I recently received data from the BLM showing the number of applicants by day for the period Nov 5, 2012 - November 30, 2013. From 2013 to 2018, the number of permit applications has nearly doubled, so your odds are only about half of what the 2013 data shows. The data was generally of good quality. There were some limitations: the lottery is not held during weekends during the winter months, it is not held when the office is closed for national holidays, and the government shutdown occurred in this period. There were also a small number of points where data was not available. After reviewing the raw data, I adjusted it so that no data was missing. Based on the adjusted data I drew the following conclusions:

To the right are two summaries of the data supporting the above. Note that the daily data shows the number of people applying in Kanab on that day, for a permit the next day.